Sergio Scaglietti, who used intuitive genius and a hammer — seldom blueprints or sketches — to sculpture elegant Ferraris that won Grand Prix races in the 1950s and ’60s and now sell for millions of dollars, died on Nov. 20, 2011 at his home in Modena, Italy. He was 91. At the PVGG Cortile 2012 his designs are honored as the 2012 Proiettore Macchina.

Sergio Scaglietti (1920-2011) of Modena began his career in the automotive industry at age 13. His father had suddenly passed away, so Sergio’s older brother lied about Sergio’s age to get him a job at the carrozzeria that employed him. Sergio, who enjoyed working with his hands, became a quick study.

When Sergio was 17, his older brother and another employee formed their own coachbuilding company and took young Sergio with them. They set up shop in downtown Modena across the street from Enzo Ferrari’s Scuderia Ferrari, and in a short time they were repairing the Scuderia’s cars.

World War II interrupted further development of the relationship. In the years after the war, Ferrari was comfortable enough with Scaglietti’s maturing talent that he frequently brought him crashed cars for repair. Then in the early 1950s, a gentleman racer from Bologna commissioned Sergio to rebody his damaged Touring Barchetta. “Enzo Ferrari saw this and said ‘That is not bad,’” Scaglietti remembered. “From this, he entrusted me with a new chassis.” 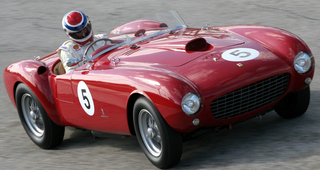 Mr. Scaglietti (pronounced skahl-YET-tee — the “g” is silent) lacked the kind of formal education acquired by his patron and best friend, Enzo Ferrari, the race driver-turned-automotive-impresario. Both believed in speed, power, utility, superb craftsmanship and sleek, sensuous beauty, and they abhorred mass production. By craft Mr. Scaglietti was a “coachbuilder,” but others use loftier descriptions.

By 1954, Scaglietti was a sanctioned Ferrari coachbuilder who received a number of chassis directly from the factory for coachwork. He designed all his shapes “by the eyes alone,” he said, letting his own “good taste, understanding of aerodynamics, style, and function” dictate his designs.

Ferraris, with their hair-raising acceleration and sleek lines, bespoke postwar modernity in the manner of the Color Field paintings of Barnett Newman and Mark Rothko or the architecture of Eero Saarinen. Mr. Scaglietti in the 1950s designed the blood-red skin of the 375MM sports car, picture above, that the film director Roberto Rossellini, the master of neorealist cinema, gave to his wife, Ingrid Bergman.

Before long, the Ferraris emanating from the shop would be ranked among the most beautiful and memorable competition cars ever made. The honor roll included such top-flight sports-racing cars as the 500 Mondial and 500 TR and TRC, the classic pontoon-fender 250 Testa Rossa, the winning 290 MM, 315 and 335 S, and the immortal 250 GTO.
In the late 1950s, with Enzo Ferrari setting him up with the banker and cosigning the loan, Scaglietti greatly expanded his enterprise. He began building numerous street Ferraris to designs by Pinin Farina. His business prospered, and Scaglietti enjoyed the rewards and prosperity the expansion brought him.

In the late 1960s, however, with labor troubles a constant, Scaglietti leapt at the opportunity to join Ferrari in a sale of his business to Fiat. Scaglietti continued to manage the carrozzeria until his retirement in the mid 1980s. Ferrari’s 612 Scaglietti model, and the Carrozzeria Scaglietti customization program, were named after the humble artisan. 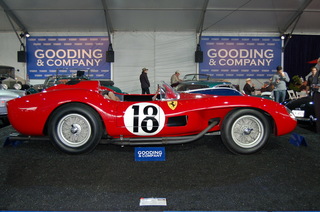 In August 2011, Mr. Scaglietti’s 1957 Ferrari 250 Testa Rossa sold for $16.4 million, said to be the most ever paid for an automobile at auction. His 250 GT California Spyder was the vehicle in which the teenage heroes of the 1986 film “Ferris Bueller’s Day Off” cavorted. (The Ferrari in the movie was actually a fake: the producers couldn’t afford a real one.)

He drew broad praise for the pontoon fenders on the 250 Testa Rossa, of which 34 were built from 1956 to 1961. The fenders’ design allowed cool air to flow into the brake area to prevent overheating. On a visit to Allentown, Pa., in 2000, Mr. Scaglietti told the newspaper The Morning Call that the Testa Rossa got its name almost by accident.

“The chief of production came to Mr. Ferrari and said, ‘We have to stop production because we have no black paint to paint the engines,’ ” he said.

Mr. Ferrari asked what color paint they did have. The answer was red. Mr. Ferrari said, “Paint the engines red and we’ll call it the Testa Rossa,” which means redhead in Italian

Mr. Scaglietti’s method was to receive a prototype from the legendary designer Battista Farina or one of his associates and “interpret” it in aluminum, rarely using a drawing. He made a wire frame, then hammered the metal into the shape he envisioned. He did this on bags of sand, because wood proved too hard. He did everything, he said, “by the eye.”

He followed the designers’ concepts to varying degrees. Many sources give him considerable personal credit for the overall look of the 250 GTO in 1962-63. Just three dozen were made, and Mr. Ferrari, who died in 1988, approved every sale personally. The car was one of the last front-engine cars to remain competitive at the top levels of sports car racing. (Most racing cars today have the engine behind the driver.)

Motor Trend Classic in 2010 called the car the greatest Ferrari of all time, and some people consider it the most beautiful automobile ever made. There have been reports that one sold for $50 million during the classic car boom of the 1980s, and the Web site Supercars.net called that figure not “entirely unrealistic.”