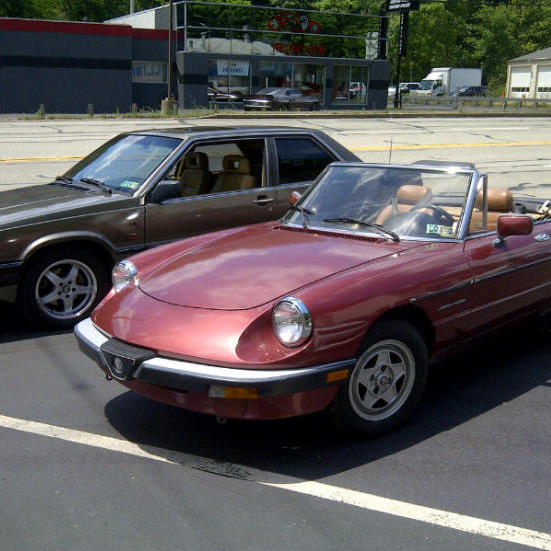 Andy Schor has not received any gifts yet

What is your role at the Cortile
Volunteer

Bernard Martin said…
Andy, can you invite some FLU members to the Fiat page when you get a second. I've posted for Walt as well

Bernard Martin said…
Andy has a very unique Blue, 1976 Lancia Scorpion that has been featured on Conceptcarz. Andy's car is #1158 of 1800 designed and built by Pininfarina in Italy and imported to the US from 1976-1977 model years. Andy's is a rust free California car and has several modifications including:

The Lancia Montecarlo is a mid-engined sports car which was produced by Lancia in Italy from 1975 to 1982.
Cars from the first series, which were produced from 1975 to 1978, were known as Lancia Beta Montecarlos and those from the second series, produced from 1979 to 1982, simply as Lancia Montecarlos. In both cases Montecarlo was spelled as one word, unlike Monte Carlo in the Principality of Monaco. Both series were offered in Coupé and Spider versions, the latter featuring a unique roll-back manually operated targa style convertible top. A low-power version of the Spider, known as the Lancia Scorpion, was sold in the United States during 1976 and 1977.
Based on the prototype Abarth 030, the Montecarlo was known as the X1/8 (later the X1/20) while in development, and was intended to be a Fiat-branded 'big brother' to the Fiat X1/9. It had a similar mid-engined layout, with a larger engine and roomier interior. The car was passed to Lancia, and was constructed by Pininfarina, the original design company, in Turin, Italy.
Total production amounted to 3,835 first series Beta Montecarlos, 1,940 second series Montecarlos and 1,801 US market Scorpions

Lancia Scorpion
The American market Lancia Scorpion was sold in 1976 and 1977, and was modified to meet American emissions, lighting and crash test requirements. The car is so called because the name Monte Carlo was already used in America by Chevrolet.
The Scorpion differed from the Montecarlo in a number of ways. It had a smaller engine (1756 cc) because the 1995 cc unit in the Montecarlo did not pass U.S. emissions standards yet. Between the decrease in engine size and the addition of smog equipment, the Scorpion came with 81 hp (vs. 120 in the Montecarlo). The Scorpion had different bumpers to meet American crash tests. The Scorpion had semi pop-up headlights and the 1976s had solid rear buttresses (Montecarlos had glass inserts except for very early models). All Scorpions featured the convertible top. Unlike the Montecarlo, only one production run of Scorpions was made. A total of 1,801 were manufactured in 1976 and sold as model year 1976 and 1977 (1396 and 405 respectively).

Bernard Martin said…
Andy, I think i may have some time on Wednesday afternoon. I have a busy morning but I've been trying to find an open block of time for a few months for us to hook up. Perhaps we can shoot for 2-3 pm-ish? Would that work?

I was referred to you by Bernard. I recently purchased a 1981 Fiat Spyder (See my member profile). Well, things got off to a bad start when I had to replace the radiator and fan switch right away. Had to towed to my mechanic. Bled the system and am having issues with the fan not kicking on. Any suggestions? Would love to bring it to the PVGP.

Any suggestions would greatly be appreciated!