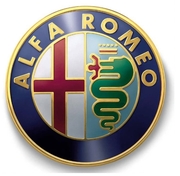 Alfa Romeo Automobiles S.p.A. is an Italian automaker founded on June 24, 1910 in Milan. Alfa Romeo has been a part of the Fiat Group since 1986, and since February 2007 a part of Fiat Group Automobiles S.p.A. The company was owned by Italian state holding company Istituto per la Ricostruzione Industriale between the end of 1932 to 1986. The company was originally known as A.L.F.A., which is an acronym for Anonima Lombarda Fabbrica Automobili (English: Lombard Automobile Factory, Public Company).

The company that became Alfa Romeo was founded as Società Anonima Italiana Darracq (SAID) in 1906 by the French automobile firm of Alexandre Darracq, with some Italian investors. One of them, Cavaliere Ugo Stella, an aristocrat from Milan, became chairman of the SAID in 1909. The firm's initial location was in Naples, but even before the construction of the planned factory had started, Darracq decided late in 1906 that Milan would be a more suitable location and accordingly a tract of land was acquired in the Milan suburb of Portello, where a new factory of 6,700 square metres (8,000 sq yd) was erected. Late 1909, the Italian Darracq cars were selling slowly and Stella, with the other Italian co-investors, founded a new company named A.L.F.A. (Anonima Lombarda Fabbrica Automobili), initially still in partnership with Darracq. The first non-Darracq car produced by company was the 1910 24 HP, designed by Giuseppe Merosi, hired in 1909 for designing new cars more suitable to the Italian market. Merosi would go on to design a series of new A.L.F.A. cars, with more powerful engines (40-60 HP). A.L.F.A. also ventured into motor racing, drivers Franchini and Ronzoni competing in the 1911 Targa Florio with two 24 HP models. In 1914, an advanced Grand Prix car was designed and built, the GP1914 which featured a four cylinder, double overhead camshafts, four valves per cylinder and twin ignition. However, the onset of World War I halted automobile production at A.L.F.A. for three years. In August 1915 the company came under the direction of Neapolitan entrepreneur Nicola Romeo, who converted the factory to produce military hardware for the Italian and Allied war efforts. Munitions, aircraft engines and other components, compressors and generators based on the company's existing car engines were produced in a vastly enlarged factory during the war. When the war was over, Romeo invested his war profits in acquiring locomotive and railways carriage plants in Saronno (Costruzioni Meccaniche di Saronno), Rome (Officine Meccaniche di Roma) and Naples (Officine Ferroviarie Meridionali), which were added to his A.L.F.A. ownership. Car production had not been considered at first, but resumed in 1919 since parts for the completion of 105 cars were still lying at the A.L.F.A. factory since 1915.[5] In 1920, the name of the company was changed to Alfa Romeo with the Torpedo 20-30 HP becoming the first car to be badged as such. Their first success came in 1920 when Giuseppe Campari won at Mugello and continued with second place in the Targa Florio driven by Enzo Ferrari. Giuseppe Merosi continued as head designer, and the company continued to produce solid road cars as well as successful race cars (including the 40-60 HP and the RL Targa Florio). 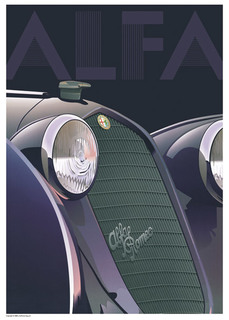 In 1923 Vittorio Jano was lured away from Fiat, partly thanks to the persuasion of a young Alfa racing driver named Enzo Ferrari, to replace Merosi as chief designer at Alfa Romeo. The first Alfa Romeo under Jano was the P2 Grand Prix car, which won Alfa Romeo the inaugural world championship for Grand Prix cars in 1925. For Alfa road cars Jano developed a series of small-to-medium-displacement 4, 6, and 8 cylinder inline power plants based on the P2 unit that established the classic architecture of Alfa engines, with light alloy construction, hemispherical combustion chambers, centrally-located plugs, two rows of overhead valves per cylinder bank and dual overhead cams. Jano's designs proved to be both reliable and powerful.

Enzo Ferrari proved to be a better team manager than driver, and when the factory team was privatised, it then became Scuderia Ferrari. When Ferrari left Alfa Romeo, he went on to build his own cars. Tazio Nuvolari often drove for Alfa, winning many races prior to World War II.
In 1928 Nicola Romeo left, with Alfa going broke after defense contracts ended, and in the end of 1932 Alfa Romeo was rescued by the government,[7] which then had effective control. Alfa became an instrument of Mussolini's Italy, a national emblem. During this period Alfa Romeo built bespoke vehicles for the wealthy, with the bodies normally built by Touring of Milan or Pinin Farina. This was the era that peaked with the legendary Alfa Romeo 2900B Type 35 racers. 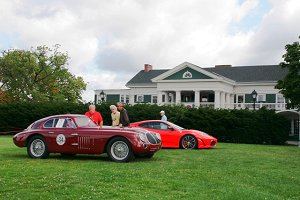 The Alfa factory (converted during wartime to the production of Macchi C.202 Folgore engines) was bombed during World War II, and struggled to return to profitability after the war. The luxury vehicles were out. Smaller mass-produced vehicles began to be produced in Alfa's factories beginning with the 1954 model year, with the introduction of the Giulietta series of berline (saloons/sedans), coupes and open two-seaters. All three varieties shared what would become the classic Alfa Romeo overhead Twin Cam four cylinder engine, initially in 1300 cc form. This engine would eventually be enlarged to 2 liters (2000 cc) and would remain in production through 1995.

Post war
Once motorsports resumed after World War II, Alfa Romeo proved to be the car to beat in Grand Prix events. The introduction of the new formula (Formula One) for single-seat racing cars provided an ideal setting for Alfa Romeo's tipo 158 Alfetta, adapted from a pre-war voiturette, and Giuseppe Farina won the first Formula One World Championship in 1950 in the 158. Juan Manuel Fangio secured Alfa's second consecutive championship in 1951. 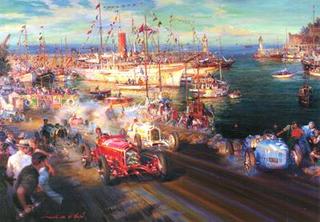 "Monaco meets Monza" (1932)
by Alfredo de la Maria The winning Alfa Romeo 8C at the hands of Tazio Nuvolari leads Caracciola's Monza and others at the Monaco harbour. 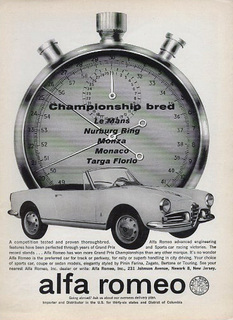 During the 1960s, Alfa concentrated on competition using production-based cars, including the GTA (standing for Gran Turismo Allegerita), an aluminium-bodied version of the Bertone-designed coupe with a powerful twin-plug engine. Among other victories, the GTA won the inaugural Sports Car Club of America's Trans-Am championship in 1966. In the 1970s, Alfa concentrated on prototype sports car racing with the Tipo 33, with early victories in 1971. Eventually the Tipo 33TT12 gained the World Championship for Makes for Alfa Romeo in 1975 and the Tipo 33SC12 won the World Championship for Sports Cars in 1977.

By the 1970s Alfa was again in financial trouble. The Italian government company Finmeccanica bowed out in 1986 as Fiat Group bought in, creating a new group, Alfa Lancia Industriale S.p.A., to manufacture Alfas and Lancias. Models produced subsequent to the 1990s combined Alfa's traditional virtues of avant-garde styling and sporting panache with the economic benefits of product rationalisation, and include a "GTA" version of the 147 hatchback, the Giugiaro-designed Brera, and a high-performance exotic called the 8C Competizione (named after one of Alfa's most successful prewar sports and racing cars, the 8C of the 1930s).
In 2005 Maserati was bought back from Ferrari and brought under Fiat's full control. The Fiat Group plans to create a sports and luxury division from Maserati and Alfa Romeo. There is a planned strategic relationship between these two; engines, platforms and possibly dealers will be shared in some market areas.

The history of the Alfa Romeo badge 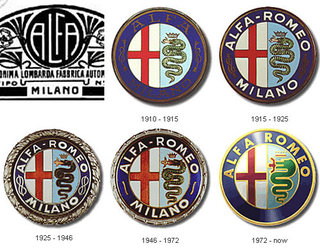 In 1910 a draughtsman named Romano Cattaneo was given the job of coming up with a badge for a new Milan-based company, ALFA. It is generally accepted that the badge is based on the coat of arms of the House of Visconti and the red cross on a white background of Milan[citation needed]. In the early part of the 5th century AD a serpent that devoured humans was said to be at large in the area around Milan and terrifying the local populace. It was slain by Ottoni Visconti and this heroic deed was celebrated as part of the coat of arms[citation needed]. The red cross on a white back ground celebrates the deeds of Giovanni Da Rio, who is reputed to have been the first to climb the walls of Jerusalem and erect a cross there during the first crusade[citation needed]. The badge can be seen as a shield, reversed, above the great door of the Castello Sforzesco in Milan.

In 1918, after the company was purchased by Nicola Romeo, the badge was redesigned with the help of Giuseppe Merosi to include the emblem of the City of Milan and that of the Visconti family in a circular motif, bordered by a dark blue metallic ring containing the inscription "ALFA — ROMEO" and "MILANO" separated by two Savoy dynasty knots to honour the Kingdom of Italy. After the victory of the P2 in the inaugural Automobile World Championship in 1925, Alfa added a laurel wreath around the logo. In 1946 after the victory of the Italian Republic Savoy knots were replaced with two curvy lines.

The evolution of the Alfa Romeo badge.
The name "MILANO", the hyphen and the Savoy knots (lines) were eliminated when Alfa Romeo opened the factory at Pomigliano d'Arco, Naples in early 1970s.

Sociology
In Italian the owner of an Alfa Romeo is an "Alfista", and a group of them are "Alfisti". Alfa Romeo is sometimes worshipped by its owners, and many models have become cultural symbols. There are many thriving Alfa Romeo owners clubs and Alfa Romeo Model Registers.

The Hosting team of the popular British motoring interest show Top Gear often state that a car enthusiast must have owned an Alfa Romeo at some point before they can be considered a true petrolhead (meaning an extreme car enthusiast).

Comment by Robert S. Costa on July 24, 2009 at 6:39am
This sounds like a great and well deserved idea. It is fitting that this will also be the year that Alfa is reintroduced to the US market.
Robert Costa
Owner of 1973 GTV

Comment by Jim and Celeste Shaw on July 24, 2009 at 7:47am
I have e-mailed International Auto Parts to see if there is any interest in participating. They have Alfa, Fiat and Lancia parts.They have a Bonneville Alfa they call "Bonnie"
Here's their site:
http://www.international-auto.com/
Jim Shaw

Comment by Bernard Martin on July 24, 2009 at 8:18am
Be sure and click on the DISCUSSION FORUM "Alfa Romeo named the "Proiettore Macchina" for 2010 Cortile at The Pittsburgh Vintage Grand Prix" above for more details.

Jim, I'll wait to see if you hear anything. We are working on a sponsor presentation as well as a very very cool Cortile Program that includes race driver profiles for the Sunday wine event at the Westinghouse Fountain

Comment by Marianne Fenoglietto on July 24, 2009 at 8:18am
great idea! and i have to say that the lunch at the vintage superb! well done!

Comment by Marianne Fenoglietto on July 24, 2009 at 8:19am
also, i can email "Alpha Ower" magazine to see if they would have an interest!

Comment by Robert S. Costa on July 24, 2009 at 9:39am
Another possible sponsor would be Centerline. They carry a large supply of Alfa Romeo parts, for both road use and race.

Comment by Bernard Martin on July 24, 2009 at 10:10am
I am heading out camping with the family for the weekend. If anyone feels motivated I would suggest to go ahead and make the contacts you guys are coming up with. In many cases the sponsors are planning out 2010 right now. Just post the updates here. I don't think that multiple contacts to people are a problem as it just gets the word out more...
Have a great weekend. (and no one talk about F1 until I get back and see the video :-)

You need to be a member of Alfa Romeo Owners Group to add comments!